About to don raincoat and walk down to the gym. Don't think it's stopped raining since breakfast, so have been spending a bit of time thinking about where to go for my next Wainwrights trip. I'm thinking Skiddaw, via Ullock Pike, Long Side, Carl Side, Little Man, Skiddaw and Bakestall. Six Wainwrights, bringing the count to 14, and leaving a nice round 200 to go! 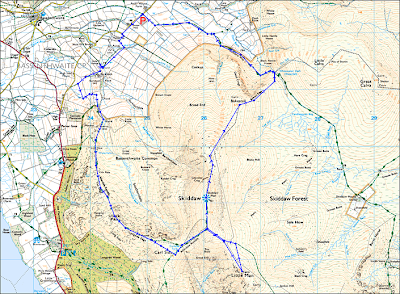 Will have to see how the time's going towards the end of the day, but I do think there would also be a pleasant diversion from the Whitewater Dash waterfall up to Great Calva; Whitewater Dash being the waterfall below Bakestall. Would add about 5km to the route, so should be fine, provided I make an early start. (Has to be a first time for everything!) I would think there should be some good views from Great Calva. Will be tempting, as according to shop psychology, the number 199 is infinitely preferable to its slightly higher neighbour. For example, why would you dream of selling a sofa for a straight 1000 when you can sell one for that almightily convenient sum of 999 and 99 pence?