( UPDATE: First use of tent was on this trip - Northern Fells Wildcamp and Partial Circuit )

Cycled to the Metro Centre on Saturday with the idea of looking for a new pair of walking socks and picking up a couple of waterproof stuff-sacks that were on special offer in Field 'n' Trek.

I can confirm that cycling is quicker and almost infinitely preferable to the two buses I'd have needed to make the same trip. It's a pretty leisurely 20km round trip, about 30 minutes on the way down, and that's the scenic route along the Tyne stopping for a few minutes for a drink on the river bank. If you're a cyclist bound for the Metro Centre and have ever wondered about the nature of the "six secure and covered bike parking areas" their website proclaims, they consist of a plastic smoking shelter, outside, with a rail to chain your bike to! I guess I shouldn't have expected armed guards and retina scanners. Maybe there's a camera pointed at it? They seem to have plenty.

My plan was working perfectly up until the point I walked into Field 'n' Trek and saw the poster saying "Terra Nova Laser Competition" followed thereafter by the words "£140 while stocks last". Half the RRP, and at least £60 cheaper than I'd seen on the web. Had to give into temptation. There were two left, and someone else was eyeing up the other one. The Photons were also reduced, but only to £245. 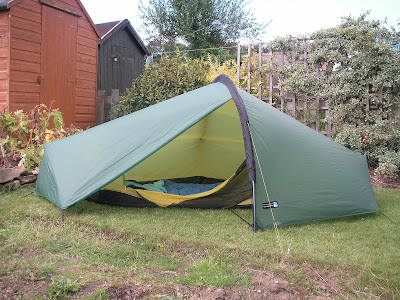 Had a quick test pitch in the back garden this morning, in a slight breeze. It's actually bigger than I imagined and, compared to my old Robert Saunders Fellpacker, a bit fiddly to pitch. Still don't think I've got the tension exactly right, and in the setup above, a strong gust would probably bring the fly into contact with the inner; but with modern materials, maybe that doesn't matter as much as it used to. Bit more practice required, but OK for an initial test run. At about 6'1" (I guess) I can sit cross-legged in the inner, head just brushing the top if I sit up straight.

Unless I'm missing something obvious, the pitching instructions consist of a small printed label inside the tent bag, less than A5 size. Might have been nice to have had a few more tips, but I suppose a few practice runs will sort it out - and there are tutorials on YouTube, and a video on the Terra Nova site. While looking for such hints and tips, I re-read this article over at BlogPackingLight where there's also some really useful mods to the Laser Competition that help resolve some of the more fiddly aspects of the pitching.

Still on the lookout for a rucksack, stove, and decent sleeping bag, but will just keep an eye open for any bargains and stick with day-walks for the time being. I'm thinking next will be Skiddaw via Ullock Pike and Carl Side. Blog post to follow later this week!